Okay, so I know this post is about 3 weeks late, but I can’t simply forego paying homage to the show which made my job tolerable for the past 5 years. For those of you who don’t know, The Office’s series finale aired on May 16, ending its glorious 9-season run on NBC. I’ve created a list of my Top 10 favorite episodes (1 being very “comedically humerous,” 10 being my favorite), and if you haven’t seen them, brace yourself for hilarity… Oh, and bonus!: Almost every episode is available on NetFlix.
1. A.A.R.M
Season 9, Episode 22/23 You may notice that this is the only episode I chose post Michael Scott’s fond farewell. I wasn’t a huge fan of the show without him, but this episode is downright hilarious. Just as Jim predicts, Dwight dubs himself the only candidate qualified to be Assistant to the Assistant to the Regional Manager.
2. Drug Testing
Season 2, Episode 20 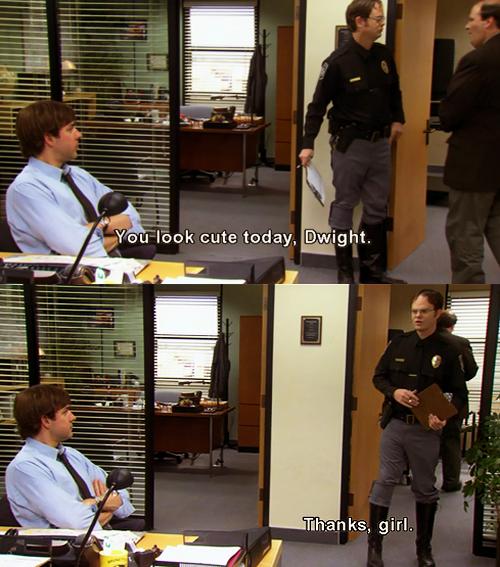 In “Drug Testing,” Dwight finds a joint in the parking lot and consequently mandates branch-wide drug testing. Michael, the true perpetrator, goes an anti-drug rampage to try and divert any suspicion.
3. The Injury
Season 2, Episode 12

Uh oh, Michael burns his foot on his own George Foreman grill and demands that the office treat him and his “condition” with white gloves. Kevin may have been diagnosed with skin cancer, so naturally, nobody in the office cares about Michael’s burnt foot… and he doesn’t take well to the apathy.
4. Diversity Day
Season 1, Episode 2 This is the episode that made me fall in love with The Office. After Michael tells a crude and inappropriate Chris Rock joke, corporate sends in a consultant to teach the Scranton branch about diversity. Michael decides that he is a much better-suited diversity teacher, so he creates his own agenda.
5. Niagara
Season 6, Episode 4/5 Jim and Pam get married… and the whole office is in attendance. Enough said.
6. China
Season 7, Episode 10

So, Dwight becomes the owner of the building, and he enforces several obnoxious budgeting techniques, including un-plying the toilet paper and installing motion sensors which sporadically turn off all the lights. Simultaneously, Michael reads an article about China and becomes concerned about their global power//influence. He brushes up on his facts and, to everyone’s shock and surprise, outsmarts Oscar in a factual debate, leaving Oscar with something to prove.
7. Beach Games
Season 3, Episode 23 Michael learns of a position opening up at corporate and assumes he’ll be offered the job. Ergo, at Scranton’s annual Beach Day, he conducts various strength and leadership tests to determine which one of his workers should be awarded the position of Regional Manager. My favorite part of the episode, though, is when Pam, running on adrenaline after a hot coal walk, builds up the confidence to speak what’s really on her mind to the entire party, including Jim.
8. Gay Witch Hunt
Season 3, Episode 1 Michael outs Oscar and vows to put an end to “100,000 years of being weirded out by gays.”  In order to avoid offending any other coworkers, Michael and Dwight scan the office for other potential gays and receive help from Jim, who has re-located to the Stanford branch and ships Dwight GayDar.
9. The Convict
Season 3, Episode 9 The epic debut of Prison Mike…
Michael learns that one of the new transfers from the Stanford branch is a former convict, and after certain coworkers start alleging that prison is better than his office, Michael invites Prison Mike to the conference room to teach the Scranton branch about the true depravity of prison.
10. Murder
Season 6, Episode 10 There has been a murder…
This episode inspired my bff Ashley and I to have our own murder mystery party, complete with tacky Honkey Tonk characters and overdone Southern accents. When Scranton learns that Dunder Mifflin is in serious financial peril, Michael busts out the murder mystery game to “distract the kids.”
Did I miss any worthy episodes?! I’ve been on a perpetual The Office marathon kick since the series finale, so any good suggestions will not be ignored. You’ll be missed, Dunder Mifflin Scranton! Replacing you will be hard. That’s what she said.

13 thoughts on “Farewell, Dunder Mifflin: The Best Episodes of The Office”