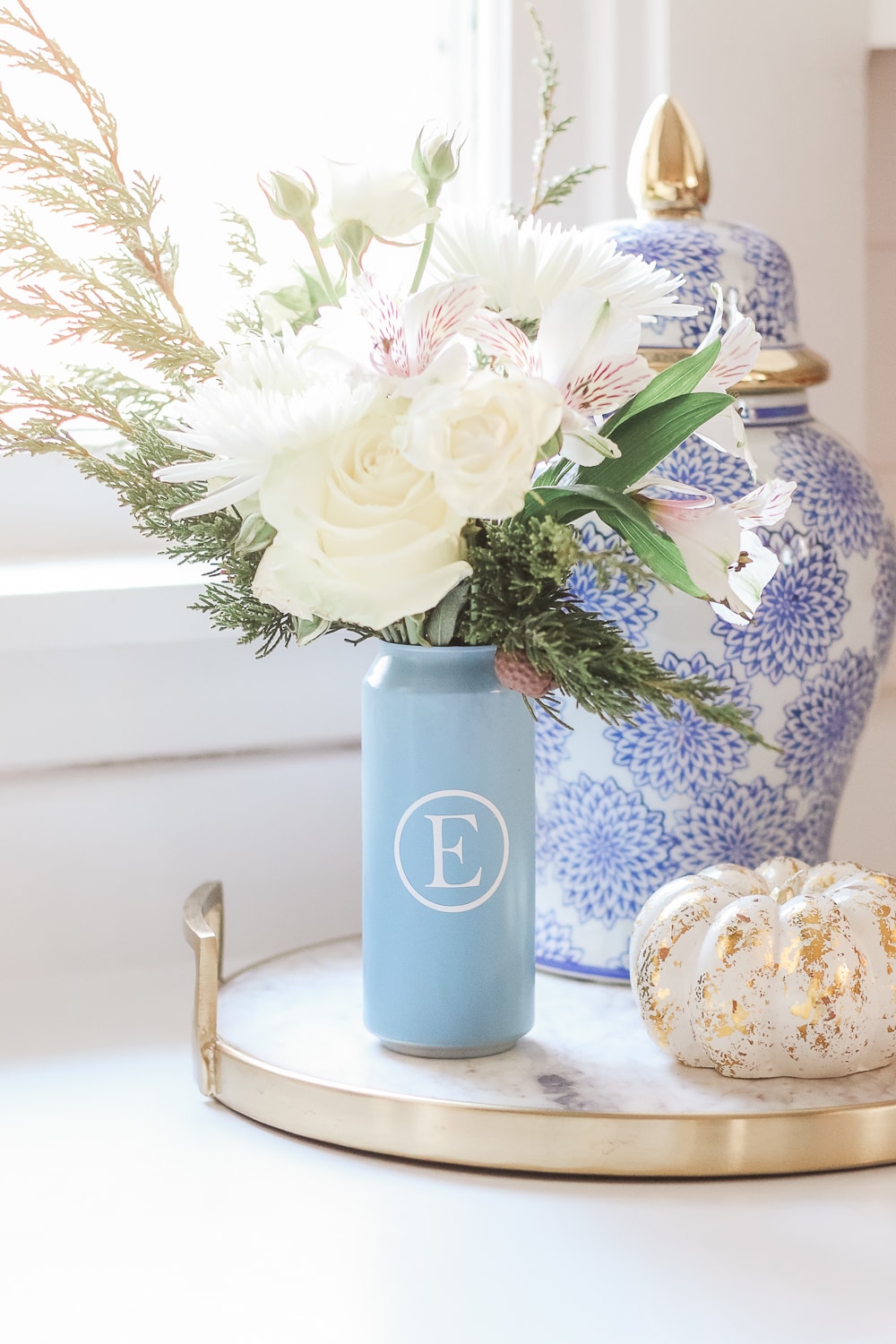 Every so often I surprise myself with my frugality. I’m working on designing a blue and orange tablescape for Thanksgiving, and I really wanted this blue ceramic pitcher vase I saw online. The problem was, though, that this vase was curiously overpriced, and I’m on a strict YNAB budget. Side Note: If you aren’t on YNAB, I highly recommend it! Also, it’s Christmastime, so now’s not the time to be spending $40 on a vase for myself regardless. So, I had the idea of taking a Sparkling Ice +Caffeine can, which is a bit taller than a traditional soda or beer can, and spray painting it French Blue for a similar effect. Then, I thought it’d be fun to take it a step further and pop on a monogram to really emulate the vase I wanted. Y’all… I can’t believe how well my first DIY soda can vase turned out.

Maybe I’m just on a frugal upcycling kick, but I’m making Kyle save all his cans from here on out. In full transparency, I was primarily motivated to create this project as part of a social sponsorship with Sparkling Ice. I wanted to share this project on my blog, too, though, because it’s so unbelievably easy, and it’s a great and legitimately budget-friendly DIY gift option for Christmas. I always thought it’d be a huge to-do to remove the top from a soda can (at least without leaving all sorts of jagged edges), but it was so simple. Keep reading for a full DIY flower vase craft tutorial, plus a few more fun soda can projects to try! One of the best things about DIY soda can crafts? They’re ridiculously low cost. Also, upcycling in general is good for the environment. Here’s everything I used to make my soda can vase–

I thought I’d need a special tool to learn how to remove the top of a soda can without damaging it. Fortunately, there’s a super simple hack that only requires sandpaper, water, and a pair of pliers.

On that note, first thing’s first– remove the tab from your aluminum can. Next, spray your 150 grit sandpaper with water. Holding the can upside down, sand the top of the can in a circular motion for about two minutes until you start to see two separate layers of metal. For reference, I held mine near its opening and applied moderate pressure to make sure I didn’t damage or make too many dents in the can itself.

Once you see two separate layers of metal, use your pliers to pop the lid right off. It should happen in one fell swoop, so if you find yourself yanking on the top, your can probably needs some more sanding. Also, if you see any jagged edges, which you shouldn’t (this method gives me a clean cut every time), gently sand them down with the moist sandpaper. Next, move your lidless can to a well-ventilated area. Cover the surrounding area with newspaper and spray the can with spray paint. You’ll probably want to do at least two separate coats to make sure it’s evenly covered. I love Rust-Oleum Painter’s Touch 2X because it’s cheap (under $5), it dries super fast, and they have the most gorgeous catalog of colors. I wanted something that would match my ginger jars in a blue and orange Thanksgiving tablescape, so I chose Rust-Oleum’s French Blue for my soda can vase. Tip: Allow sufficient time to dry before moving on to personalization.

For an added personal touch, finish your vase off with a classic monogram. I used my Cricut Explore Air 2 to design and cut mine. If you want something similar, you can access the template I created in Cricut Design Space. Just hit detach in the lower right-hand corner, select the “E,” add in your initial, and hit “Make It!”

If you don’t have a Cricut or smart cutting machine, these white vinyl alphabet decals achieve the same result. You can also order some really adorable personalized monogram decals from Amazon, too. Super cute, right?! I do recommend adding some rocks to the bottom of the vase before adding or arranging any flowers, though. It’s super light, so having that extra weight helps create some stability.

More Soda Can Projects to Try

To be honest, I’m completely new to upcycling, and I’m already super into it. I love the idea of taking something old (maybe even something someone else would consider trash) and turning it into something new, wonderful, and custom. Plus, when you’re on as strict of a house-hunting budget as we are, it’s fun being able to make decor instead of buying it.

If you’re also on an upcycling kick, here are a few other soda can projects to try. If you don’t already follow these awesome DIYers, I highly recommend doing so. The creativity is so inspiring, especially if you’re a saver and/or if you’re on a budget!

If you have any other fun ideas for upcycling old soda cans, I’m all ears! I’d love to include your project if you have one, too, so feel free to leave a link in the comments. Also, as always, please don’t hesitate to let me know if you have any questions about how I made my DIY soda can vase. I’m happy to help!

I was reimbursed for the cost of these products as part of a sponsored social campaign with Sparkling Ice. I loved this project so much that I decided to feature it my blog, as well, although I had no obligation to do so. As always, all thoughts and opinions are my own.